There are different kinds of geopathic stress and strain from electrosmog, which can have a considerable effect on the health of animals or humans.

These restrictions can manifest as serious illnesses.
In particular, sleeping and lying areas must be completely free of interference zones in order to ensure the night-time regeneration of the body.
A distinction is made in the animal world between those who seek out radiation and those who try to avoid it.
Animals that feel good among rays include cats, ants and bees, while those who prefer to avoid rays include dogs, horses, sheep and humans.

Water veins
Water veins are underground streams.
The existing groundwater and any water added to the natural water circulation flow through the earth at different depths.
The radiation from a water vein depends essentially on the flow dynamic: radiation is greater when water veins cross each other.
Faults are displaced or twisted layers of earth that can lead to differences in underground voltage and charges. The radiation from a fault usually stretches across a large area.

Grid systems
There are so-called Hartmann, Benker and Curry grid systems, named after their discoverers.
A distinction is made between grid system lines and grid system intersections.
Grid systems stretch across the entire surface of the Earth and can change as a result of cosmic and meteorological influences. Much stronger radiation can be found at the intersections of these grid systems.

Elektrosmog
The generic term electrosmog refers to electrical and magnetic alternating fields, as well as impulse-modulated irradiation. Electrical and magnetic alternating fields are created by electrical charges.
Impulse-modulated irradiation refers to radiation from mobile signals, UMTS, DECT, W-LAN, Bluetooth, satellite radio, WiMax, etc.
All of this radiation – especially if animals or humans are exposed to it permanently – is associated with the following health-related effects:

It is important to detect these fields of interference and to take the necessary measures to prevent a considerable impact on health.
By means of bioresonance, the entire house/apartment and the property can be inspected, and any such exposure determined.
Depending on the exposure discovered, the possible measures are discussed individually. 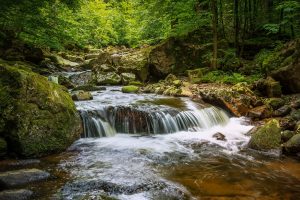