Homoeopathy is a gentle healing method, which, in contrast to conventional medical treatment, does not combat the symptoms, but rather searches for the cause and activates the body’s own self-healing powers, thus helping the body to heal itself.

This alternative natural medical treatment of animals is based on the principle of similarity, as developed by Samuel Hahnemann in the 19th century:
“Heal like with like”
That means that the undiluted homoeopathic remedy triggers the same symptoms in a healthy animal as those that are to be healed in a sick animal.

For example, if the animal has a fever, it is not administered an antipyretic, but instead an individual remedy is sought which causes fever.
The vegetable, animal or mineral base raw materials are then diluted in stages. This process is known as potentialisation.
Depending on the existing symptoms, causes and progress of the illness, homoeopathic medicines are applied at differing potencies.
When used properly, homoeopathic medicines do not have any side effects.
Animal homoeopathy can be used for chronic and acute illnesses, and healing occurs both at a physical and an emotional level.
Homoeopathy can be used individually as an alternative treatment method or also in combination with and in support of conventional medical treatment. 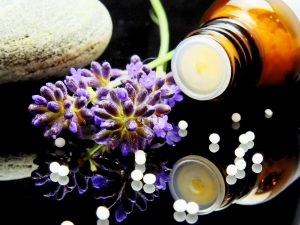