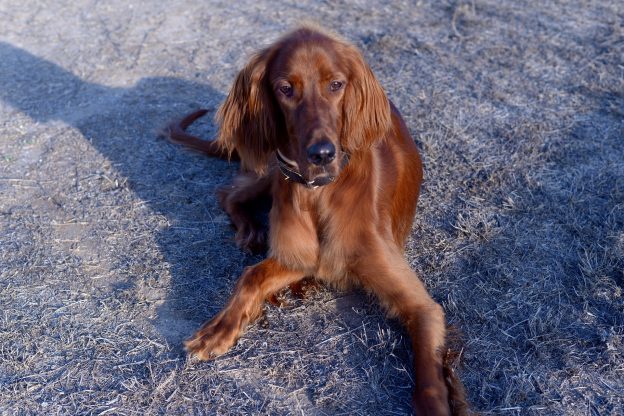 Sam is a 14 year old Irish Setter suffering from spasms for a few weeks.

Epilepsy is a disease in which the brain nerve cells are over-energized and the dog gets spasms.

The primary is differentiated from the secondary epilepsy.

The primary epilepsy is a hereditary disease that occurs more frequently in certain breeds.

The secondary epilepsy is caused by others reasons, such as poisoning, inflammation of the brain, liver and / or kidney disease, or, as Sam, just the age …

There are many different symptoms that may indicate an epileptic spasm as:

the dog falls or lies on the side, does no longer responds, his eyes are turned, shows stretching spasms, waving his legs, may lose urine and feces, drools heavily.

Twitching of individual limbs or muscles, unusual behaviour, such as gasping for nonexistent fly,

run in circles, staring into the air or at people / objects, barking, anxiety, crying, great attachment may indicate a spasm.

It is very different how long an epileptic spam takes.

Does your dog have an epileptic spasm, be with him, calm him, hold him.

Most dogs are very tired, confused, disoriented, hungry and thirsty after a spasm.

Offer him water and food as often as possible.

Often the epileptic spasms are announced with a so-called aura, the dog will change its behavior, is restless or very quiet, follows you or or …, then you can calm him with petting and words and so sometimes reduce the extent of the spasm.

Please see your Vet to discuss the treatment .

If the dog is young, there are anti-epileptic long-term medications, if the dog is old, you should have, just in case, medication to get the dog out of a possible permanent spasm.

For Sam we have clarified the possible causes with the bio-resonance analysis, harmonized the corresponding frequencies, supporting him with naturopathic remedies, so he is now spasm free for 10 days.